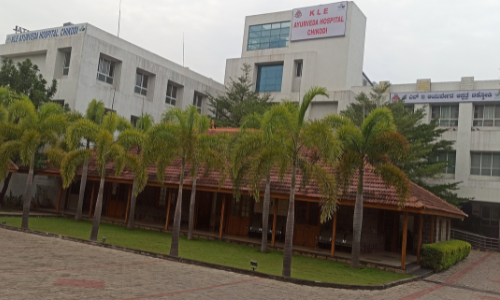 Ayurveda is a comprehensive ancient natural healing science, the origin of which is obscure but is attributed to Atharva Veda. Systemic documentation of science was started in the 6th century. The major lexicons of Ayurveda called the Bruhatrayee viz Charaka Samhita, Sushruta Samhita, Ashtanga sangraha were documented between the 6th century BC to the 7th century AD which is called the Samhita period.The word Ayu means life and Veda means Knowledge, therefore Ayurveda aims at the longevity of life by healing the ailments.

KLE Ayurveda Hospital is a teaching hospital of upcoming KLE Ayurveda Medical College under the ambit of KLE Society, Belagavi. It is a pioneer in providing quality healthcare service through Ayurveda since 1933. It is a well-recognized hospital in and around Chikodi and is functioning in the present building since August 2019. The hospital is on the path of rapid growth with excellence in offering healthcare services through Ayurveda with 100-bed strength in a campus area of about 3,600 sq.mtr.